Federal District Court for the Middle District of N.C.

Federal District Court for the Western District of N.C.

Dan Deuterman is a spirited advocate for his clients inside and outside the courtroom.

In his law career, Dan has helped countless injured workers and their families obtain the medical care and the compensation they deserve. In fact, he has achieved some of the highest workers’ compensation settlements in the state of North Carolina.

Dan is one of a select group of board certified specialists in workers’ compensation law practicing in North Carolina. He also is a member of the prestigious Million Dollar Advocates Forum.

Dan is deeply committed to community service and volunteer work. He supports a number of charities and community organizations through gifts of his time, expertise and financial contributions.

Along with his wife, Dawne, Dan endows a scholarship at UNC School of Law.

He is politically active in protecting the rights of injured people at the local, state and national level. He was a founder of the grassroots organization Protect N.C. Workers.

Dan received his undergraduate degree from UNC-Chapel Hill in 1987. He graduated from the UNC School of Law, J.D., and was admitted to the N.C. State Bar in 1991.

Dan has served in leadership positions with the N.C. Bar Association and other community and professional organizations. He served on the UNC Law Alumni Board of Trustees from 2012 to 2016. He was on the Board of Trustees for New Garden Friends School in Greensboro from 2008 to 2016.

He and the firm have been recognized for their pro bono work, ethics and community service.

Dan is a member of the N.C. Advocates for Justice (NCAJ), the N.C. Bar Association (NCBA), the Workers’ Injury Law and Advocacy Group (WILG), the Greensboro Bar Association (GBA) and the Guilford Inn of Court. He served on the NCBA’s Workers’ Compensation Section Executive Committee from 2009-2013.

Dan received the 2011 Ebbie Award, an award given annually by NCAJ’s president to members in recognition of service and inspired commitment to the organization. Also in 2011, Dan received a second award from the workers’ compensation section of the NCAJ for his “extraordinary service rendered to the section in furtherance of the preservation of justice for injured workers in North Carolina.”

The NCAJ has also recognized Dan as part of its Leader’s Forum and Circle of Advocates members who provide sustaining support to NCAJ’s legislative efforts.

Since 2011, Dan has been included among The Best Lawyers in America® in workers’ compensation law. The designation recognizes his experience, expertise and reputation among his peers.

Dan is a past recipient of the Power of Justice Impact Pro Bono Award in 2008, an award given by the N.C. Bar Association and Business Leader Media.

Dan lives in Greensboro with his wife, Dawne. They have three sons and two granddaughters. 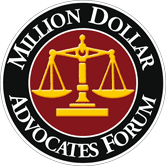 If I get a lawyer for my Workers’ Compensation case, will I get fired?

Why can’t I get paid for pain and suffering in my Workers’ Comp case?